The Lake Kununurra Barramundi Stocking Group is a local community group, aiming to provide a long-term sustainable fishing option on Lake Kununurra for locals and visitors to the East Kimberley. Check out the history of Lake Kununurra in our timeline below. 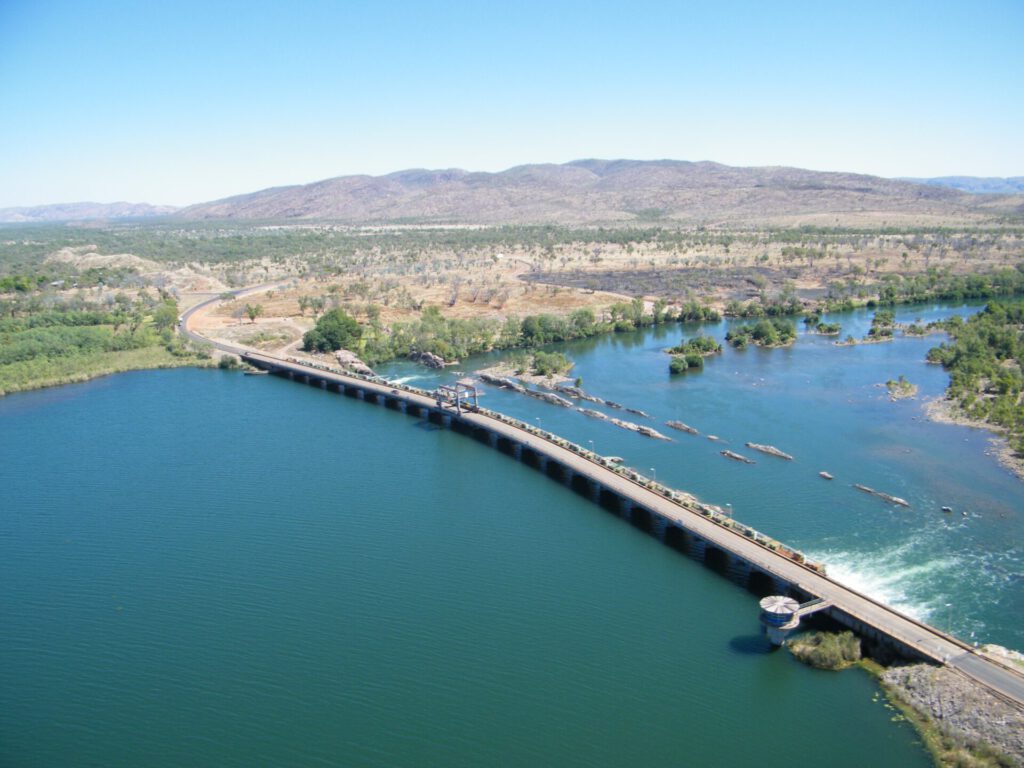 Lake Kununurra was formed through the building of the Kununurra Diversion Dam (KDD). This cut the migratory pathways for catadromous fish, such as barramundi, moving from the Ord River estuary system upstream into much of the freshwater environment of the river. However due to the design nature of the dam’s water release points, the downstream flow of fish was less inhibited. As a result, trapped populations of those impacted fish either moved downstream for breeding purposes or lived out their lives in the dam and slowly died off. The result was the gradual loss of some fish species to the upper regions of the river. In 1972, the Ord Dam was constructed about 55km upstream of the KDD, forming what is now known as Lake Argyle. 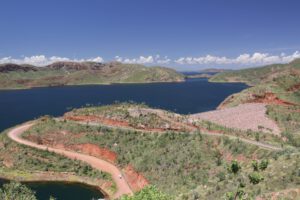 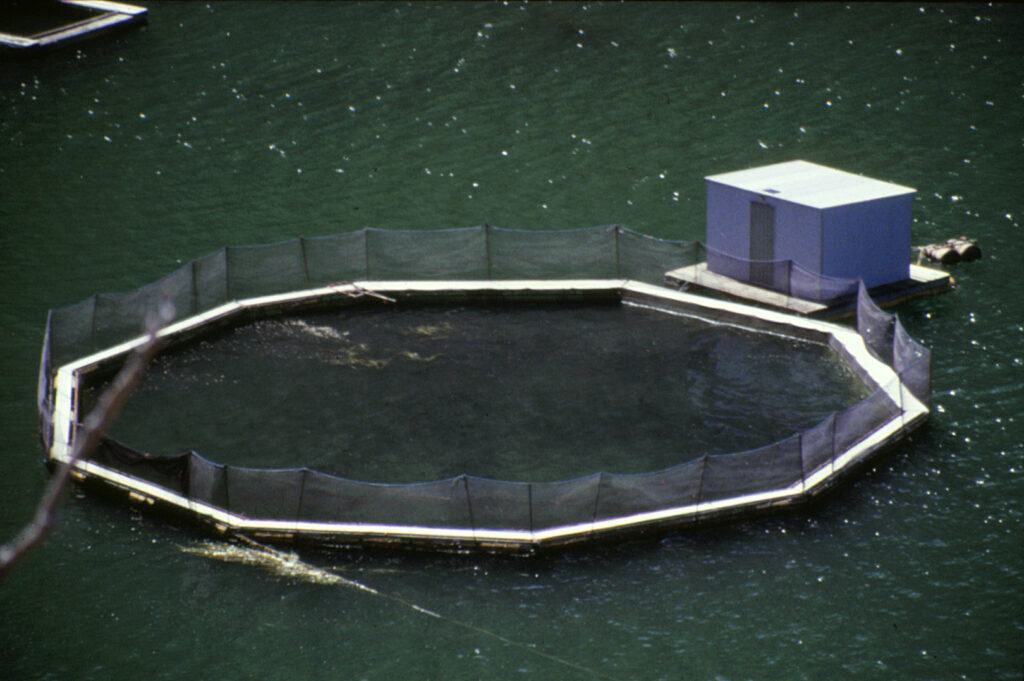 The 90s, and potentially slightly earlier, saw the establishment of a commercial barramundi enterprise at Lake Argyle. This commercial venture included a number of ‘grow out cages’ on the lake. There were occasions when fish escaped from the cages due to net damage or harvest incidents. In the mid-90s professional fishermen catching silver cobbler on Lake Argyle started to find those barramundi escapees, catching them in their nets as the fish moved around the lake.

Regional Recreational Fishing Advisory Committees were created in WA to provide advice to State Government on various recreational fishing issues. In 1993, the East Kimberley Recreation Fishing Advisory Committee (EKRFAC) was formed when the Kimberley group was split between east and west. From the onset, the EKRFAC started to advocate for finding a means to re-establish migratory pathways on the Ord River to allow fish to regain access above the two dams to the full length of the river.

EKRFAC renews its intention to pursue the issue of re-establishing migratory pathways to allow the restocking of Lake Kununurra with barramundi. The following year, the Committee invited stakeholders to form a working group called the Lake Kununurra Fish Stock Enhancement Group (LKFSEG). The member organisations were:

The LKFSEG gave itself three objectives to determine the feasibility of the concept: 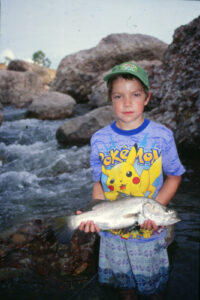 Though probably in residence much earlier, barramundi escapees from Lake Argyle were documented in having moved into and down the spillway creek situated between Lake Argyle and Lake Kununurra.

The Lake Kununurra Barramundi Fishery Economic Benefit Study was completed. It reported that provided Lake Kununurra could be successfully stocked with barramundi the expected benefits could be: 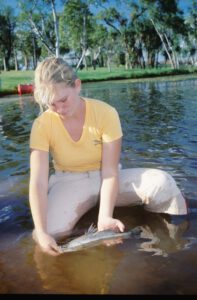 The EKRFAC carries out a tagging program, catching small barramundi below the KDD and releasing them into Lake Kununurra. More than 300 fish were released over the period, with a couple of returns coming from the lower Ord and one from Spillway Creek

The report on the Ecological and Social Issues Concerning the Establishment of a Recreational Barramundi Fishery in Lake Kununurra was released. The summarised findings were:

The commercial barramundi fishery on Lake Argyle closes due to marketing issues. In the process of harvesting the remaining fish, a large number of barra inadvertently escape captivity into Lake Argyle.

An interagency meeting was held between representatives from the following organisations:

The meeting resolved the following as its key findings:

The meeting proposed the following steps in order to progress the project:

Fisheries Biologist, with Queensland Department of Primary Industries Fisheries, visits Kununurra to carry out investigation and provides a report on his findings in September 2004.  The summary:

The Fourth Australian Technical Workshop was held in Kununurra. 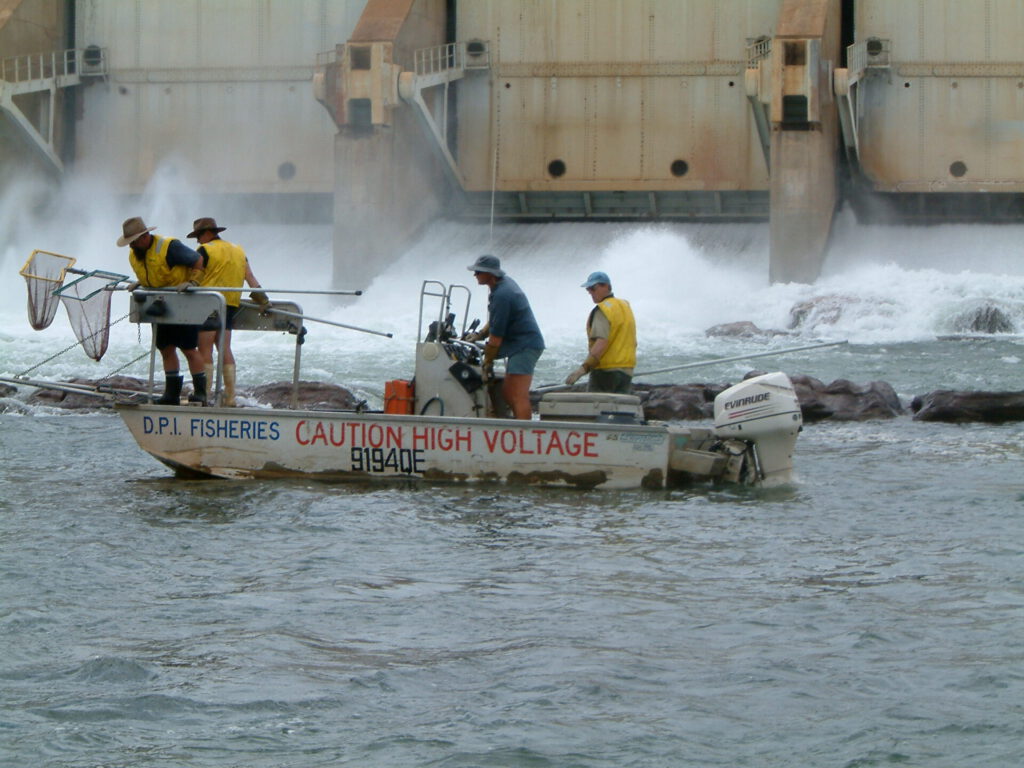 The fish assemblages of the Ord River project was undertaken.  The study was specifically designed to gauge the effect of migratory barriers on fish of the Ord River, to investigate fish passage requirements and solutions and found: 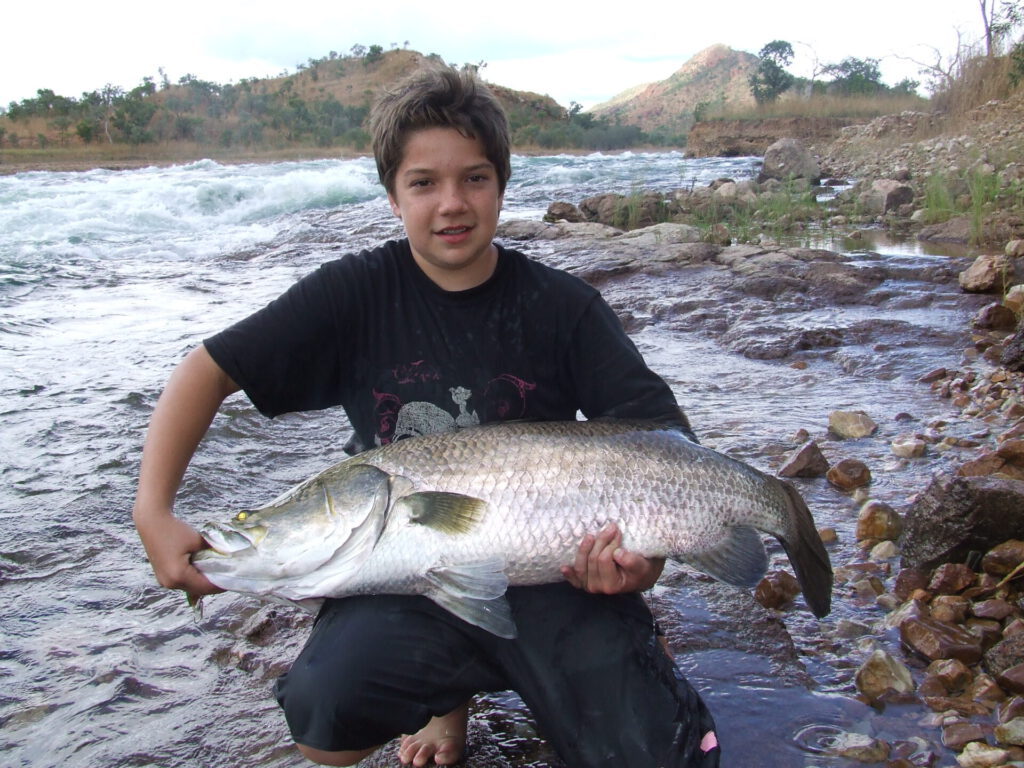 Spillway overflows of about 2m and large numbers of escapee barramundi, most between 80cm and 1m, move into the spillway and downstream into Lake Kununurra.  Kununurra locals fish the spillway over that Easter in droves and many fish are caught and lost in the rapidly moving water

Shire of Wyndham-East Kimberley and the Miriwung Gajerong Aboriginal Corporation are successful in securing funding for Design Options and Costing and Cultural Fishing Values, through the Commonwealth Recreational Fishing Community Grants Program. 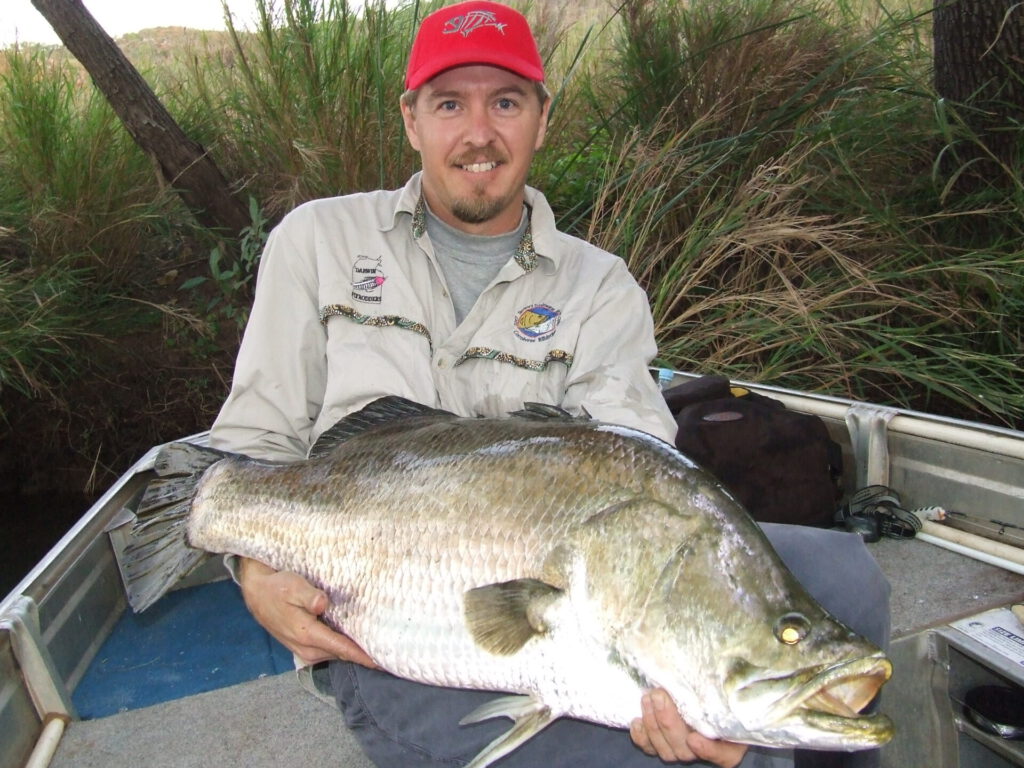 Large barramundi, measuring 1m and larger, start to become viable angling targets in Lake Kununurra and Lake Argyle, but are only targeted by only a very few number of anglers. 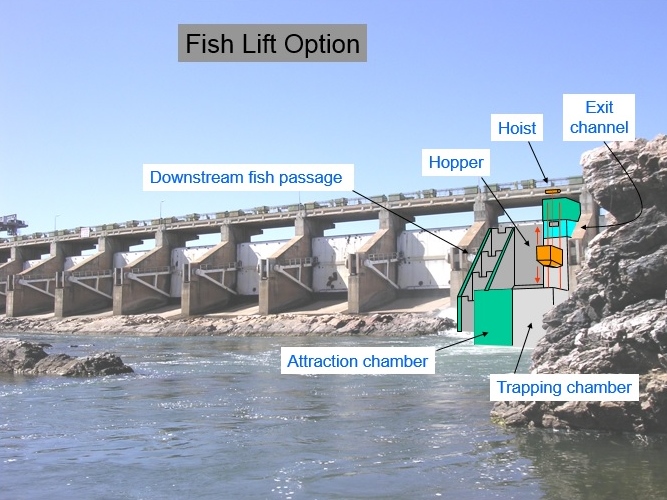 The final report on preliminary design options and costing of a fish lift attached to the KDD was received. 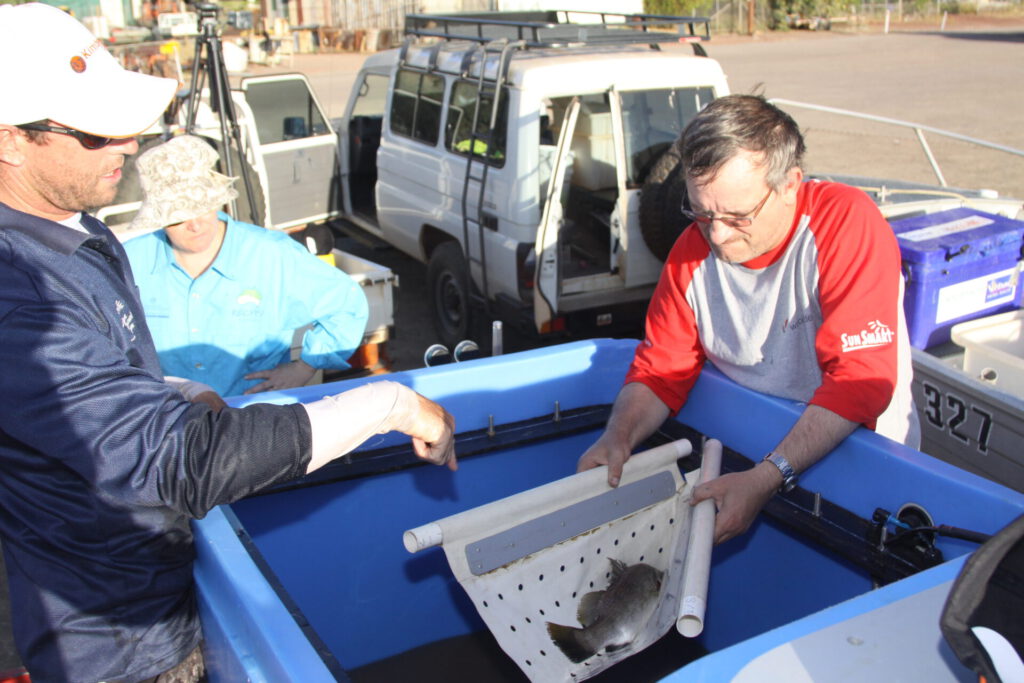 KTI travels from Broome to Kununurra and with local recreational anglers begins broodstock collection in Parry Creek and Ord River resulting in a number of small male fish being transported back to Broome to await the female fish. Another attempt at gaining further broodstock was undertaken in May 2011 where more male fish were collected but no female fish.

A proposal is put to the Kimberley Development Commission to collect bloodstock and stock a small number of barra into the lake, as a pilot study – it is accepted in April, 2010. A month later, the Western Australian Fish Foundation was awarded the contract to collect broodstock and provide fingerlings through Kimberley Training Institute (KTI) for a pilot study. 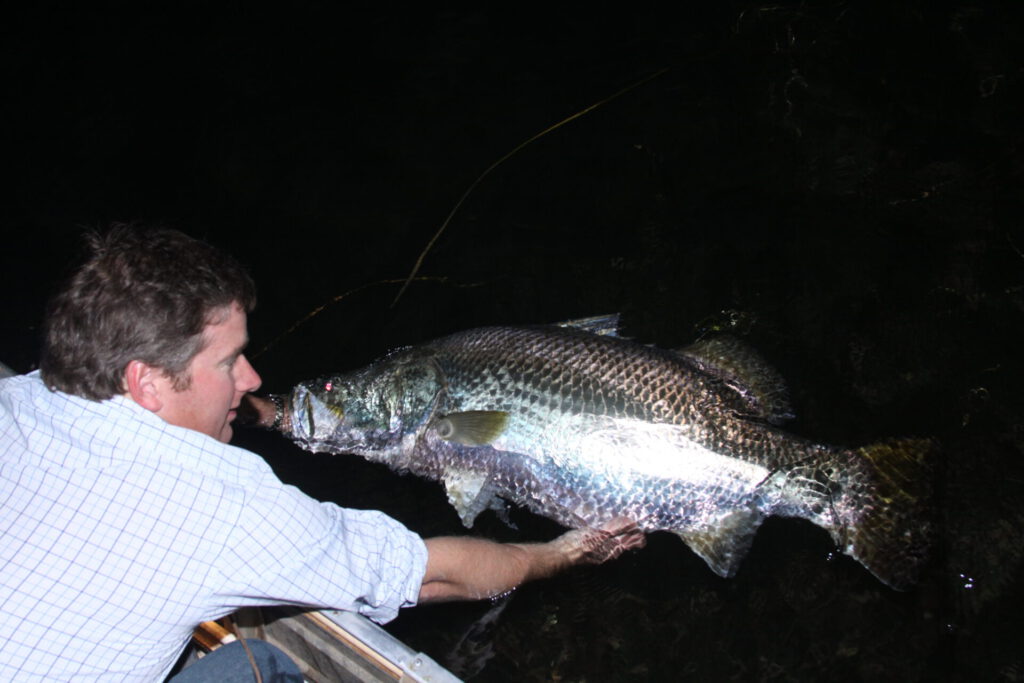 The then-leader of the WA National Party, Brendan Grylls, fished Lake Argyle with a local angler and caught two 1m-plus barramundi, while dropping a third specimen at the boat.

Despite the small number of commercial escapees in Lake Argyle, this demonstrated fish would remain in the lake due to abundance of prey to support a recreational fishery. 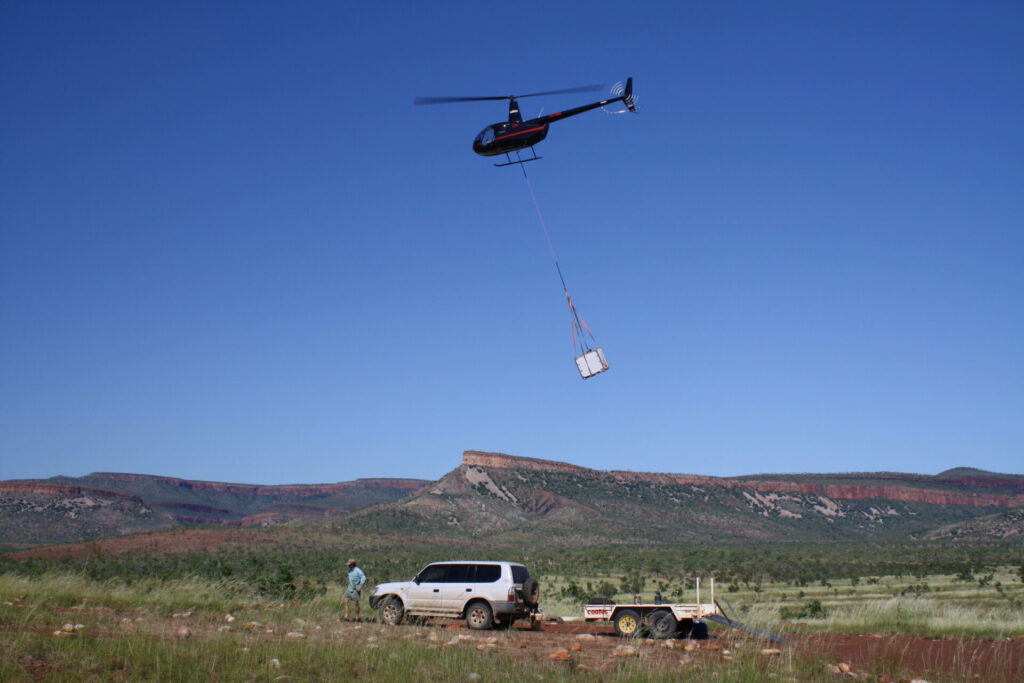 Anglers collect female broodstock, with a holding cage secured and assembled on Lake Kununurra. Between October and December, about 20 fish are collected and kept in the cage until they could be transported to Broome just prior to the new year. 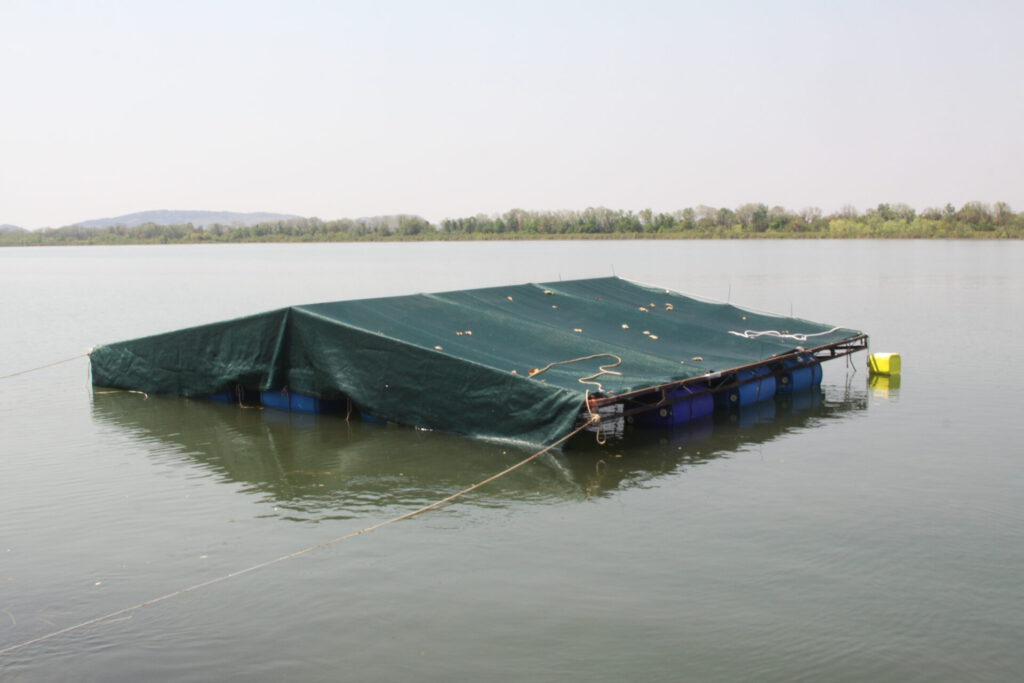 Lake Argyle reaches 200 per cent capacity and the spillway runs at 8.32m over the top. Hundreds, if not thousands, of fish are swept downstream, many perish. 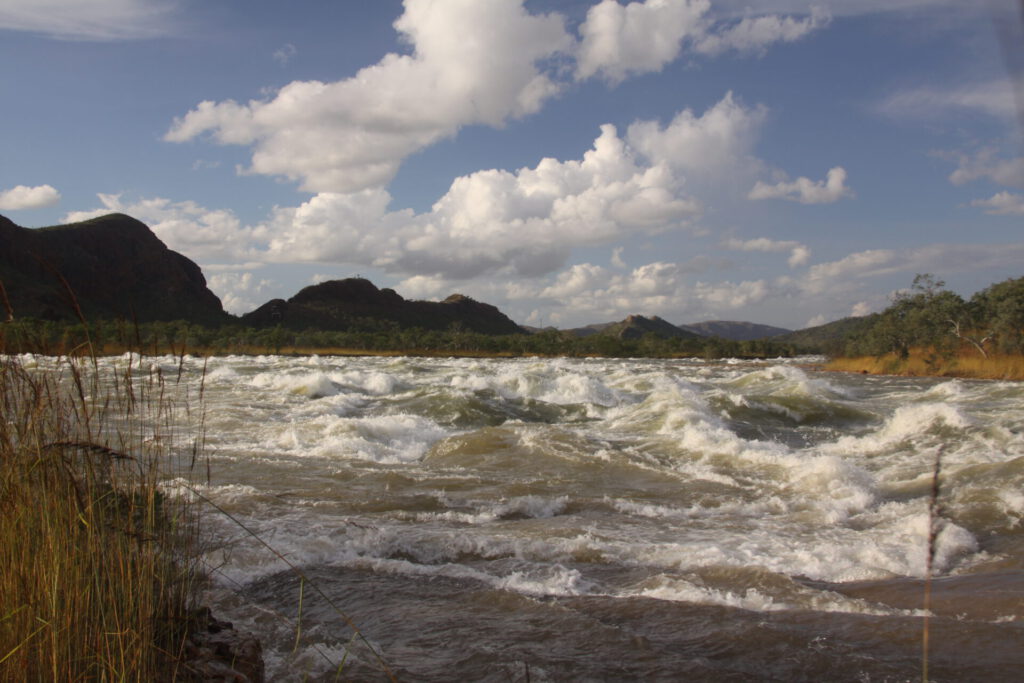 KTI, alongside Recfishwest and the State Government, release 20,000 barramundi fingerlings into Lake Kununurra to mark the start of the Lake Kununurra Barramundi Stocking Program. 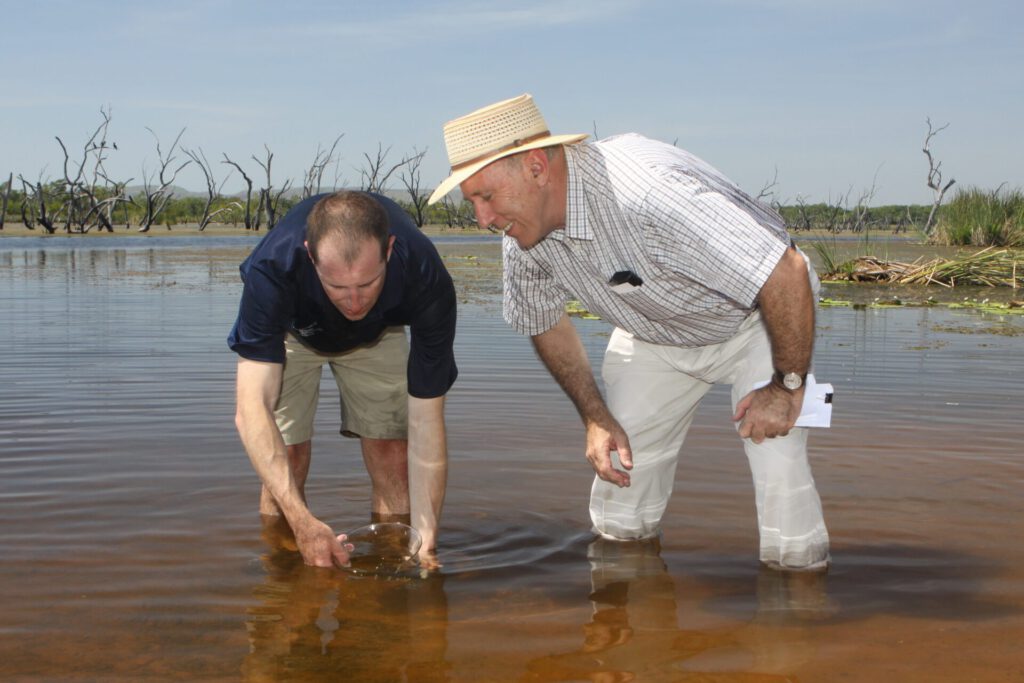 Fin clips taken from fish captured in Lake Kununurra and analysed show that both eastern (escapees) and western (local) fish were present in the lake. Length of the ‘local’ fish sampled ranged from 1m to 1.15m.

Data was recorded by volunteers showing catch effort per trip and fishing hours. The number of fish and fish lengths were recorded to give a further indication of growth rates. See graph below.

A new economic benefits study is released by the Lake Kununurra Barramundi Stocking Group, indicating the fishery could have a conservative economic value of $9.16 million to $9.81 million annually if the restocking program continues. 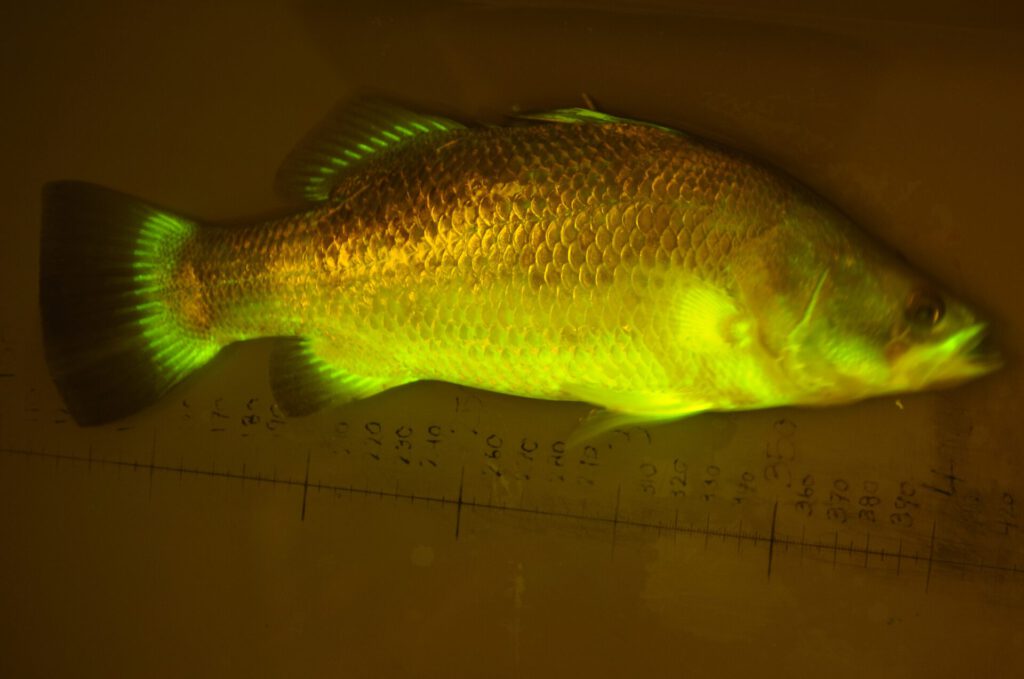 Work continues towards stocking more barramundi into Lake Kununurra thanks to $975,000 funding through the State Government’s recfishing COVID recovery package, announced in August 2020. This package was developed by the State Government in conjunction with Recfishwest.